Put June 2nd-3rd on your calendars for an all out war between North vs South!!! Its amazing what Mother Nature can do in just 3 days as you can see from the April 25 picture to the April 28th pictures.

We still have a lot of work to do to get the facility ready for the season opener for Friday Night Drags. A work bee will happen this weekend as previously posted so come on out, enjoy the sunshine and lets get this party started.

And don’t forget Misty and Mike’s Junk in the Trunk Swap Meet this Saturday from 9am to 5pm. 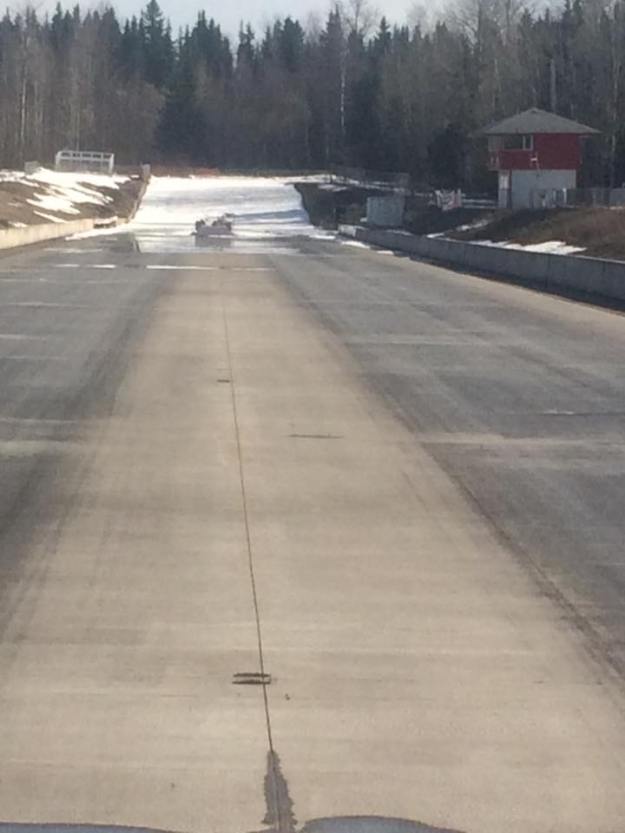 Alright everyone, it’s that time. Time to put in a little elbow grease and make our track the prettiest track in BC. A work bee will be held this weekend May 5, 6 from 9am to 5pm and possibly next weekend (if needed). Please come out and help us get the track ready for the 2018 race season.  Many hands make light work. Please also bring out power tools, ie: chain saw, weed whipper,etc. There is a lot of work to be done in a short time due to the late spring we have had.

If you purchase a membership for NITRO you qualify for an ATI (ANNUAL TECH INSPECTION) One tech inspection for the entire year? YES!!!!! This can also include racers for Friday nights. All ATI cars still subject to random checks through out the year.

We have had to make the regretful decision to postpone our season opener Friday Night Drags on May 4th. Due to the amount of snow still left and the fast melt we are expecting, we have decided to not risk any damage to the property.

Along with this it also will force us to cancel and reschedule or 1st point race weekend for the May 12 weekend. We are so very sorry, but we cannot risk any damage to the wonderful facility we have here at NITRO Motor Sports Park.

Stay tuned for posting on first Friday Night Drags date and the reschedule of  our first points race weekend.

Please download and fill out registration form and email it back to us at nitromotorsportspark@gmail.com

Saturday March 10th was our 2017 Awards Banquet and a good time was had by all. Just over 130 people were in attendance where we awarded all class winners and also the special choice awards. The silent auction and the car races were once again a great hit. Thanks to all of those that attended and supported this great event. We now look forward to the 2018 race season as spring is upon us and things are starting to melt.                Please click the race schedule and pricing tab for the 2018 race season info or click here

Driver of the Year – Andy Closkey

Rookie of the Year – Devon Doyle

Cheerleader of the Year – Tony Wiebe 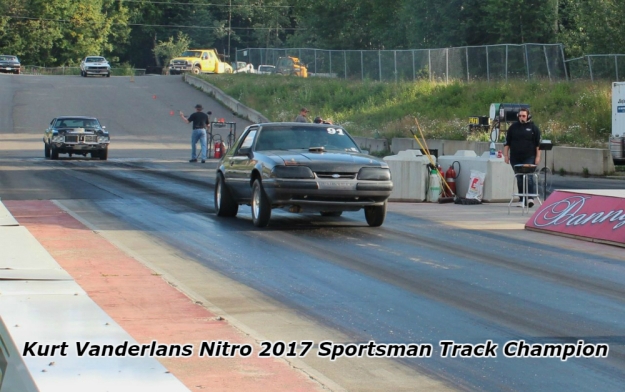 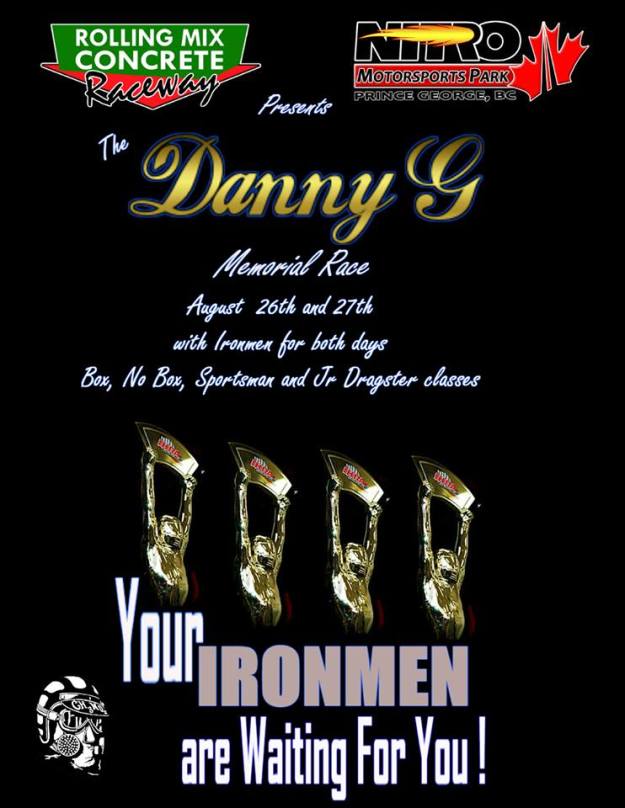 We got swag!!!! NITRO Hoodies.

These zippered front, quality Guilden hoodies are available for a limited time only and must be pre ordered. Please post on this page your sizes and quantity. These will be ready for pickup on the July 8/9 race weekend. The final date to order is Thursday June 22nd. Small, Medium, Large and Xlarge $40 XXL and larger sizes $45

You asked, we can and we will. Youth sizes small to Xlarge. $35 Unfortunately there are no women’s sizing only unisex. Please ensure you order the correct size. Order list below

David Kowalski is still in the process of getting the most out of his pro modified race car.
Having earned his pro mod license last fall, he’s gradually increasing the power he gets out of his 2015 Corvette.
His latest progression on the ladder of speed was enough to cook the Rolling Mix Concrete Raceway pro mod track record. Kowalski, from Fort St. John, covered the quarter-mile in 6.76 seconds with a top speed of 200.5 miles per hour with his best pass of the day Saturday in the box class eliminations.
On Sunday he was back on the track and advanced to the second round before he was eliminated by Dave Preston and his 1970 Nova.
In that race, Preston had a dial-in time of 11.18 seconds, while Kowalski had a 6.87-second dial-in. That meant he had to engage his transmission brake for four-and-a-half seconds, waiting at the start line after Preston had left. It didn’t take him long to make up most of that time, but Preston got to the line just ahead of him to win the race.
“Who says pro mods can’t bracket race,” quipped Kowalski, a 25-year veteran racer who had never been to the Prince George track before the weekend.
“It’s the first time I’ve been here and I like it.”
Until he bought his new car last September, the 44-year-old Kowalski raced a 1971 Nova, which got him down the track in nine or 10 seconds. His new ride is a significant upgrade. He earned his license last year in Mission, where he posted a best time of 6.64 seconds at 205 mph.
Kowalski has a busy race schedule ahead of him with IHRA events in Fort St. John and Edmonton but he hopes to return to NITRO Motorsports Park in August, and by then he should be ready to crank up his supercharged engine and be even faster.
“I’ve got 1,000 horsepower we’re not (using) yet,” he said.
In Sunday’s finals, in the (electronic) box class, Wayne DeRose of Fort St. John and his 1968 Camaro exacted revenge on Brian Barby of Prince George, driving a rear-engine dragster. The two met in Saturday’s final and Barby won it, but his .721-second reaction time doomed him to runner-up status on Sunday. DeRose clocked 8.79 seconds at 154.11 mph to cross the line well ahead of Barby, who posted a time of 8.24 with a top speed of 161.72 mph.
“I was asleep at the wheel,” said Barby, who also serves as president of the Northern Interior Timed Racing Organization (NITRO).
In an all-pickup truck, no-box final Sunday, Forde Carrie of Terrace in a 1962 Chevy defeated Dallas Wiebe and his turbocharged 1993 Ford Ranger.
In sportsman, Kurt Vanderlans of Prince George, driving a 1991 Mustang, topped Stephen Closkey of Quesnel in his 1980 Datsun 280Z.
Ryan McCray of Prince George captured the junior dragster event Sunday.
Greg Dawson of Prince George won the bike/sled class Saturday and Sunday, while Kelsey Lefebvre of Quesnel won the teen challenge event both days.
On Saturday, Rocky Hoover of Prince George, back racing for the first time in three years, drove his 1973 Firebird to victory in the no-box final, edging Andy Closkey of Quesnel and his 1965 Chevelle, while Camaro driver Bill Bryce of Quesnel defeated Cal Barnes of Prince George to take home the sportsman title.
Racing returns to Rolling Mix Concrete Raceway on Friday with street legal racing from 6-9 p.m. 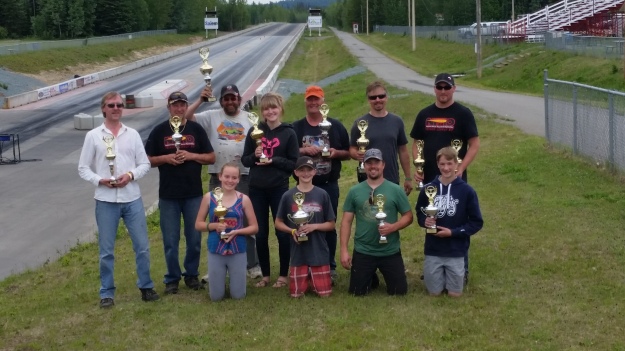 Sundays Winners and Runners up  Back Row L to R

In order to qualify for the team finals race you must be a IHRA member in good standing. For those points leaders looking at going to the world finals in Memphis you must have a registered X number in order for your points to count towards this For more information and to register please call the IHRA office at 1-419-660-4219